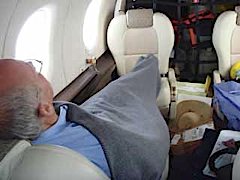 Flying out from Seattle- yet another thirteen hundred mile leg; this time heading for Oklahoma City. Things were beginning to feel very familiar- too familiar even. JP, exhausted after tending to the needs of five aircraft, crew, and passengers, for the past three months, slept in the back wrapped in a blanket like a cocoon. He'll probably sleep for a week once he gets home- he slept hardly at all during our journey. The trip was demanding for all involved, but JP got the dregs of the duties; trudging to airports at all hours of the night and day to secure fuel, file flight plans, and negotiate with difficult officials. Weighing through mountains of useless bureaucracy, spending hundreds of hours printing charts, making calls back to the home office in the States, and conducting pilot briefings; JP did it all for the love of travel and little else. His health deteriorated as the trip wore on, he was battling bronchitis and extreme fatigue when the group was refused access into China. How ironic that the Chinese inadvertently gave our trip director the few days rest he so desperately needed. At the time, JP didn't realize how sick he was getting, which is always a dangerous prospect.

We landed in Oklahoma City, flaps functioning- aircraft flying and working just fine; this was a very good feeling. The fatigue of the trip was beginning to catch up to Art and I by this time. The adrenaline boost of making it to the US, was wearing off. We were ourselves, experiencing the kind of exhaustion that comes from flying through multiple time-zones, weeks with little sleep, and Siberian hotels. We know this city pretty well- I used to come here for horse shows, now we both come here every year for the Traditional Cowboy Arts Association exhibition that is held here at the National Cowboy and Western Heritage Museum - a really super event. We have friends here, it would be great to makes some calls, see who's in town, but we're just too tired. We did manage to take JP to one of our favorite BBQ joints in town (Earl's) for some real Oklahoma style pulled pork and smoked brisket. It was great, but now I have to mention that they make great brisket in Hong Kong as well- who knew? Only after arriving home , did we realize how special it was to land at the Wiley Post Airport and pay an unconscious tribute to the first man to fly around the world after completing our own round the world flight. 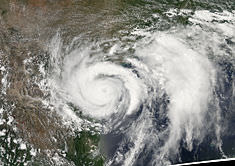 Eight hundred miles to go and we're home! Now we can really feel the pull- but the weather is pretty bad. There is a lot of disturbance coming off hurricane Dolly as she heads for the Texas/Mexico border. The Gulf of Mexico is a mess, and there's a big line of thunderstorms being thrown up across our flight path back. We file for a 7 am departure to beat the build-ups and shoot for home. Leaving early to get ahead of the weather is a strategy Art and I have used for many years- once again it paid off. We cleared the weather just fine and landed- good old KOCF!!! Our trip is complete- with our final touch-down we have successfully flown our Pilatus PC-12 over twenty five thousand nautical miles (over twenty-eight thousand statute miles) around the world. The ultimate cross-country flight; KOCF-KOCF via the entire planet. Now that's what I call taking The Long Way Home. JP was grateful also, he got to fly with us instead of having to take a commercial flight; we were happy to have him along on the final legs. We towed 555PE into her hangar- she's a bit dirty and in need of some attention but all in all this plane is in top shape. It was lunch time so we started up a car we'd left parked in the hanger and drove over to the little airport restaurant that's here on the field. 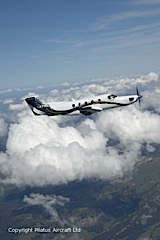 It just so happened that Scott Ducker, a Pilatus representative from Georgia that we know, was delivering one of the brand new Next Generation PC-12's to its new owner. We all got together for airport burgers and celebrated our successful flight, then we took a tour of the new Pilatus- very nice glass panel- and a lovely addition to the growing PC-12 fleet here at KOCF. We took JP home with us and put him up for the night. The evening was spent visiting and talking about this incredible journey- Scott came by the house, so we threw some steak kabobs on the grill and had wine and cheese. I couldn't wait to see the horses and "Dinky"- everyone did just fine, the yard looked good, the house was just as we left it- amazing. A big source of anxiety for me was worrying about leaving the house for so long. Our careful planning had paid off though, we had a lot of fantastic support (thanks Bill, Jill and the girls!) while we were gone from a lot of very wonderful people.

I didn't believe the TV news before, and now I know for certain they're all a bunch of big fat liars

So now we've been home for a week, the plane is finally unpacked, gifts have been distributed, the piles of laundry have shrunk from enormous to normal and I finally got to put the last of the suitcases away. Things are falling back into their routine; catching up with mowing the yard, feeding the horses, cleaning the kitchen- ordinary things never meant so much. I find myself searching for the big moment though, that big "ah-ha" epiphany that you think is supposed to happen but there's none. Seeing the world as it really is does have an interesting effect.I never put much faith in tourism brochures before this trip and now I put even less. Seeing famous places for real is always way different than what they show you on the "Travel Channel". It's the parts they leave out that are the most significant. I didn't believe the TV news before, and now I know for certain they're all a bunch of big fat liars. We are very sheltered, managed, and shielded here in the States- unless you get out there and see for yourself, you'll disagree with me I'm sure. For a nation that prides itself on freedom of information, what comes into this country through our media is shockingly filtered. 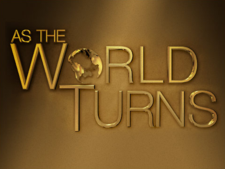 I did learn some interesting things about people. The most constantly popular TV programming genre though-out the world, in every country we visited, is the Soap Opera; even the Muslim countries love them. The world's number one sport is soccer. People are going to be friendly most everywhere, and no matter where you are in the world, if you need help, chances are, someone will help you out; even if they don't speak English. Cab drivers around the world like to chat it up with their fares- especially if they speak English; they like to practice. No matter how small a country may be, the people who live there will take great pride in their nation and will enjoy teaching you something about their corner of the world. There will always be something unexpectedly interesting, beautiful, and tasty anywhere you happen to land. A movie theater is a great place to go when you need to feel like you're home again; even if only for a couple of hours. Ice cream is the world's most popular desert- every country comes up with their own special flavors- try the Olive Oil ice cream in Oman, it's so yummy.

I used to think it got hot here in Florida, but now that I've been to Africa and the Middle East, I know what real "hot" is all about. If you think we live in the most modern, clean, country on earth, visit Asia and be humbled a bit. The most important thing I could say though, is go, get your passport and get out of the USA. See for yourself what the rest of the world is really like; the perspective is priceless.