This next-to-the-last article in the series will examine using two of the most popular choices of satellite communications terminals available to sailing market, the SAILOR 250 Fleetbroadband from Inmarsat and the mini-VSAT V3 from KVH Industries. Previous articles went over using WiFI, 3G/4G and Satellite Phones to connect to the internet and our last article (to be published next) will connect all the pieces by explaining the software choices.

The satellite communications terminal works on the concept of an array of satellites in an unobstructed view of the boats antenna along with an electronics box onboard to perform the communications. It all hooks up to your computer either through a direct Ethernet connection or over a WiFi connection. Be careful if you have the connection on WiFi as the costs can get out of hand in a hurry!

A word to the wise here, in that both of these systems charge you airtime by the MB (megabyte) not by the time you are connected. At first this might seem a better, less expensive solution like some of the other systems I've already talked about in the other articles in this series but, be careful! Modern computers and devices have many processes running all the time in the background over the internet and your can run up a huge bill in no time! I'll cover this problem is much more depth in the next and final article in this series.

Both of these units differ greatly in their initial cost, operating expense, and speeds. They both have a similar sized antenna that you can fit on a radar pole, pushpit or, alternatively, on one of your mast spreaders. Let's get into more detail on each of these units. 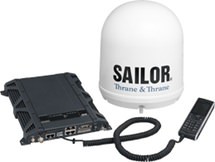 I had one of these on the Hallberg-Rassy 54 and was under contract with Inmarsat for a year before selling the boat. I had used it while crossing the Atlantic in both directions and enjoyed reliable service . Since the unit uses the same satellite constellation as does the Isatphone Pro I talked about in a previous article you can see there are some trade-offs to consider here. Since there are only three geosynchronous satellites you will only be using one of them at a time for communications. This means, the satellite is fixed in one position in the sky and your boat may be bouncing around a bit and have the mast or some other portion of the boat interrupt the line-of-sight from the antenna to the satellite.

In actual experience, this happened infrequently for me but when it did, the connection dropped and I had to wait a bit to re-establish it or have to stop and turn the boat to unblock the antenna from the mast. Certainly inconvenient at times. 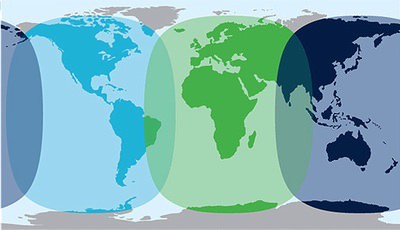 The connection was easy to make (just press a couple buttons on the phone's handset to set up the data connection) and plug in the laptop to the Ethernet connection with their 'black box' unit. You were online instantly and could use email, web browsing or any other activity. When you were done, you just pressed a couple of different buttons to disconnect.

The speed was acceptable, considering you were far from land, but not that remarkable. The download speed was at best 284kB and the upload speed was 284kB. This is in line with some of the first DSL connections to your home a number of years ago. Still way faster that using a SatPhone but not as fast as using WiFI or 3G/4G connection while closer to land.

However, Inmarsat is not a good company to work with. When I started with them I signed a contract with a minimum monthly commitment of USD $57. Whether you ever turned the system on or not each month you were billed this amount as a minimum. With their airtime costing USD $13.00 per megabyte you burned through the money at an alarming rate. Their rates starting January 2013 jumped to USD $27.99 per megabyte! Voice calls are at USD $0.79 per minute.

If that isn't bad enough during the year my 'contract' was in force, they unilaterally decided to change my base amount per month from USD $57.00 to USD $220.00. Of course they never told me about this, just started charging me. Complaining to them didn't change anything, they feel they have a monopoly and don't care about customers.

Like I said, not a good company to work with. On the next boat, I'll be using the mini-VSAT product and will not miss Inmarsat at all.

The mini-VSAT industry has been coming on strong in the past number of years. It now accounts for a substantial percentage of all the satellite terminal business and it's no wonder as it has a significant set of advantages over the older Inmarsat system. Although VSAT systems also use geosynchronous satellites they are multi-purpose satellites used for broadcast TV, telephony, etc. As such they are primarily located over land-masses and not open ocean. Although complete coverage is in place for the north Atlantic to the equator, there is a gap in the South Atlantic and Southern Indian and Pacific Oceans.

If you’re planning a world circumnavigation then perhaps the lack of complete, worldwide coverage may put you back in the monopoly of using Inmarsat. My decision is to use the Iridium Extreme satellite phone to get important weather and grib files in the places where the mini-VSAT has a gap.

One of the main differences is the enormous increase in speed. On the moderately priced V3 product you get 2mB download speed and 128kB upload speed (4mB download and 1mB upload from their v11 system). This compares to what you can get on land and is remarkable to have at sea! Of course, like the product from Inmarsat, the mini-VSAT system charges by the megabyte however the price difference is substantial.

The base-level pricing is USD$ 49 per month and includes 50mB of download. If you exceed that 50mB then each megabyte will cost you USD $1.99 (not the horrendous USD $27.99 charged by Inmarsat!). Voice calls as well are less expensive on the mini-VSAT costing only USD $0.49 per minute. Checking into your mobile phone companies' roaming fees you can see that using mini-VSAT for most of your calls while you’re away from your home will be much cheaper than paying mobile roaming costs.

Connecting using the mini-VSAT is also easy with nothing more complicated than pushing a few buttons and the internet is available.

So, from my viewpoint, it appears that unless you really need worldwide coverage, there are sound tremendous advantages to installing and using a mini-VSAT system over the SAILOR 250 Fleetbroadband. In my opinion, Inmarsat is completely behind the times with their satellite technology and way out of line with the operating costs and billing practices.

For me, the best combination of communications tools to have onboard would be an Iridium Extreme to be used for passages across the mini-VSAT areas of non-service and the mini-VSAT for everything else.