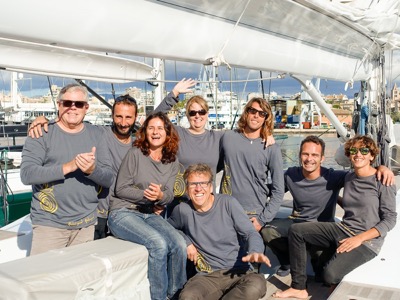 At this time way back in December of 2014, there were seven of us on board sailing yacht Feelin' Good: Gustavo, Mira, Jonsi, Andrea, Pitiou, Giamma, and myself. We'd sailed from Lanzarote in the Canary Islands, after unexpectedly having to say goodby to Art. Unfortunately, he'd previously tumbled into the rear lazarette hatch during our passage from Palma de Mallorca to the Canaries and the X-rays showed a fractured rib, so much to everyone's dismay, his passage to the Caribbean ended early. For the rest of us, over three thousand miles of open sea remained between us and our planned destination; Antigua.

We were just a few days out from Lanzarote when the winds dropped off to nothing in the Atlantic. Captain Giamma made the wise call to hold up in Capo Verde and wait for the winds to build back in. I never thought I would ever be spending Christmas one hundred miles due west of Dakar, Senegal, but here we were; having a pretty terriﬁc time actually. If you ever find yourself in Mendelo, on the island of São Vicente, I recommend taking in the Portuguese folk music, sampling the old colonial city's many eating and drinking establishments, and chilling out.

We had a wonderfully international crew on board: Swiss, Italian, French, Spanish, and Caribbean. No less than seven languages amongst us, and a fantastic Christmas menu which included Jonsi's Mallorcan rice with fresh local slipper lobsters as the centerpiece: bounissimo! After Christmas, the winds returned, and we had a cracking passage. We would celebrate New Years at sea; 2015 arrived in the middle of the Atlantic Ocean, we were on the move, sailing fast in huge following seas. We sailed into Falmouth Harbor by the light of the super moon; Art was there waiting for us, standing on the dock with a huge smile on his face.

Being constantly on the move is a theme that has continued throughout the year. In November of 2014, we left the harbor in Palma de Mallorca, sailed through heavy seas as we departed the Mediterranean, then across the Atlantic, then the entirety of the Caribbean Sea, motored through the Panama Canal, sailed over three thousand miles of the Western Paciﬁc into Polynesia, then made our way down through Polynesia's thousands of islands, experiencing diverse cultures, delightful people, amazing scenery, terriﬁc diving, until we finally reached New Zealand one month ago. 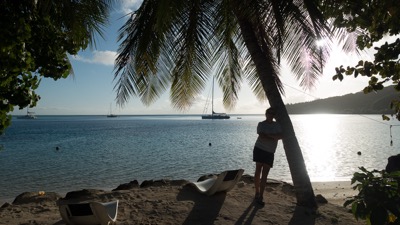 In all, we've managed to transit 13,280 nautical miles of open sea this year. It's something I never thought in a million years I would ever do. I have to say I think this whole "bucket list" thing is rather ridiculous, I mean, why limit your life’s experiences to what you can ﬁt in a bucket? Much less a metaphorical one dreamed up by Hollywood.. and besides, why limit yourself to what you think you want to do? Based on what you think you know about the world? If 2015 has taught me anything, it's that opening yourself up to unknown possibilities is the greatest gift you will ever give yourself: try it and see what happens.

In 2010, Art announced that he'd signed up to take an ocean sailing course with two friends in Cadiz, Spain, and at the time I said two things: "that sounds great honey", and “you'll have a great time sailing with your buddies". Ha ha, I had no intention of participating- no sir, no way, nada. The thought of taking a sailboat across an ocean was anathema, and nobody was going to convince me otherwise. Ok, so here we are, five years, two yachts, three Atlantic crossings, and now half the world under our collective sailing belts- what changed my mind? The sea.

Our planet is two-thirds water folks. Most people have only viewed the sea from a beach- that's pretty sad. When people discover I'm an ocean traveler, inevitably they will ask: So what's the worst weather you've ever been in? By which they mean: How bad has it gotten out there? The biggest waves I've seen so far were in the Atlantic; like translucent blue mountains covered in snow that are chasing you- waves so big they momentarily block out a big chunk of the sky… yeah, that big. The experience of standing at the helm of an Italian designed, carbon-fiber, high performance sailing yacht that has just experienced liftoff from one of these monsters and begins to surf at twenty knots+, fills you with a mix of exhilaration, terror, and delight that will stay with you and leave you buzzing long after you've reached shore. The worst weather I have ever been in? Well that depends, as there are three places a sailor experiences these things: at sea, at anchor, and in the harbor. Which is the worst of the three depends on how you and your boat came out the other side. Fortunately we've done pretty well. I don't attribute this to luck as much a careful planning, skill, and an extensive knowledge of weather: it pays to plan. We have all the modern tools on board and we use them. That said, we've still had a few memorable heavy weather sailing experiences during 2015. 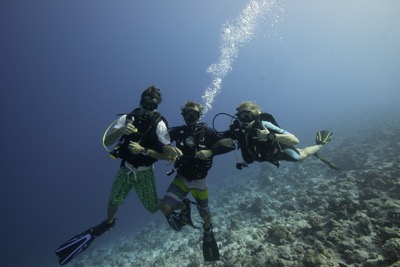 The most intense sea conditions we experienced this past year were exiting the Mediterranean, and transiting the Western Caribbean. The Mediterranean Sea bottom is littered with wrecks for a reason, anyone who sails the Mediterranean regularly has tremendous respect for how quickly conditions can change. The same holds true for the Western Caribbean; wind and waves build up against the isthmus of Central America, creating milky, frothy, churning, jumbled, crossed seas that don't seem to ever want to let up. We experienced winds over forty knots, and routinely ragged rough seas- it was a washing machine.

One of the most remarkable places we sailed to also happened to be one of the most treacherous; the San Blas Islands, just off the East coast of Panama. Fabulously beautiful, totally undeveloped, and populated by friendly indigenous tribespeople, the archipelago is littered with wrecks. I can't recall an island we visited that didn't have at least one or two attached to its reef, and we saw a lot of islands during our stay there. Many of the wrecks were quite fresh, and many were sailing yachts: here be dragons. Anyone who sails anywhere near the San Blas islands at night, or in poor conditions, is an absolute stupid fool.

Bora Bora, yeah, that Bora Bora… a wonderful, mythical place in the French Society Islands; incredibly beautiful and also surprisingly treacherous. Not for the weather so much, although strong winds were a factor. We had two remarkably close calls there. The first was when a charter catamaran from The Moorings nearly plowed into us; it was broad daylight, we were at anchor! The second was at night when another catamaran broke free of its mooring line and nearly drifted into us. Once again we were at anchor, just minding our own business. It can be incredibly difficult to guard your boat against raving idiots, I've found they're a much more dangerous and unpredictable hazard than the weather. 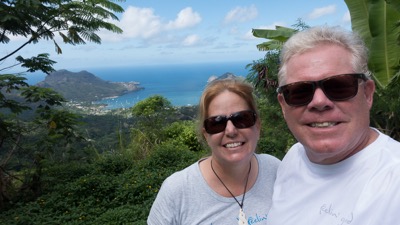 So what about the good stuff? Oh man, unbelievable… The passage from the Galapagos to the Marquesas was by far the most delightful passage of the trip so far. It's known as “The Cocoanut Milk Run" for a reason- it was really terriﬁc. Reaching those magnificent, emerald green mountainous islands of the Marquesas was a magical experience. As we approached, you could smell the fragrance of tropical flowers on the sea breeze. The opportunity to sail into the Marquesas should not be passed by under any circumstances; if you get the chance to do this, absolutely do it.

French Polynesia is amazing. Marquesas, Tuomotus, the Society Islands and Tahiti, everyone has seen photos, we all imagine what it would be like to go there and see these places for real, but nothing prepares you for actually being there. You see the travel magazine views, but there's so much more, and then there's the real life of the people. The people we encountered were remarkably kind, we were total strangers yet we were invited to share meals in people's homes and often given gifts of fruit; in Polynesia we experienced the best side of humanity, it was tremendously uplifting and inspiring. 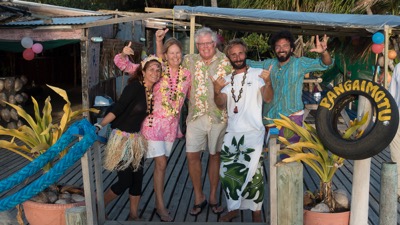 Tonga is another place entirely, yes, the Kingdom is known as the "Friendly Islands" and it's true, the people are very friendly indeed. The islands themselves are another matter. Sailors are advised to keep their wits and only move the boat in daylight and only when conditions are favorable. Wonderfully beautiful, with many fabulous reefs, the diving there was the best of the entire year- absolutely. Not long after we arrived, locals advised us to take care, "We lose a boat or two every season here, and usually someone manages to get killed." Ok! Gosh, thanks, we will certainly keep that in mind.

The weather in Tonga when we arrived was atrocious due to the strong El Niño battering the Paciﬁc. This is by far the place where we experienced our most severe, most dangerous weather conditions and they occurred at anchor. On two separate occasions we were forced to move the boat in the middle of the night due to sudden severe squalls. When I say sudden, I'm not kidding. We had a lovely clear sky and no wind when we anchored, pleasant conditions through the night, but around three in the morning, we were hit with an instantaneous, powerful squall of 40-50 kts. I've seen lots of tropical weather, but this was really extreme. Not the sort of thing you want to be doing in Tonga! Anchoring can be tricky here, we often found the anchoring ground weak, difficult and unstable. Dramatic wind shifts were common. Art was on deck one day, we happened to be anchored in the main harbor of Neiafu, Vava’u in the north, when another yacht drifted by having slipped its anchor; nobody was on board. Shortly after a tender streaked by with the crew onboard to chase the boat down before it ended up on the rocks.

So here we are in New Zealand, ah civilization… sweet! We crossed the 180th meridian on our way down here from Tonga: halfway around the world is now official. We've all been spending the past month catching up, chilling out, and recharging after a long season. We arrived in Opua on 12 November, we've pretty much been anchored off the tiny village of Russell ever since. We've all been making regular trips ashore, rented cars, driven around the countryside, visited country fairs and markets, gone on wine tours and visited quaint country lodges. New Zealand is terriﬁc!

Kiwi's are an amiable bunch for sure, and folks in town now all know us on sight. Feelin’ Good has become something of a fixture- like our regular lunches at the Duke of Marlborough. A tour boat motored nearby the other day, close enough that we could hear the tour guide speaking over the boat's sound system describing, "That large blue sailing yacht off to your right, we have many international visitors, yachts sail here from all over the world…” Ha ha, yeah, maybe we've been vegging a bit too long.

Next we head south for Auckland, where we will be undergoing maintenance and preparations for the 2016 season in Fiji and New Caledonia; so many more adventures to come. All of us onboard Feelin' Good wish you healthy, happy, prosperous New Year!! Merry Christmas, Buon Natale!!!