After months of waiting, Feelin' Good was finally loaded on a transport ship yesterday and we are standing by for departure to see them leave Phuket bound for the voyage home to Palma de Mallorca in the Mediterranean. Andrea is onboard to look after Feelin' Good for the 3-4 week journey and will have our YellowBrick activated so we can all follow the passage as if we were sailing it ourselves.

The transport will stop in the Maldives to pick up another yacht and then will go through the Suez Canal stopping in Izmir, Turkey then Rades, Tunisia before arriving in Palma about the middle of May. It's unknown exactly how long the passage will take as the transport ship will have to wait to unload their normal cargo in each port before being able to proceed to the next one. Hopefully this will not add too many more days onto an already-long trip for Andrea. 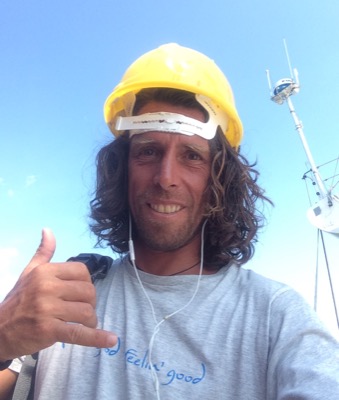 Before we made the decision to transport Feelin' Good rath than sail her back ourselves, wecarefully examined the risk factors to people and the yacht in sailing back through the Suez. There still remains a huge swath of the Indian Ocean and Gulf of Aden that is considered a HRA (High Risk Area) and yacht insurance companies will not provide coverage. While the number of pirate incidents has dropped since their peak in 2011, there are still enough to warrant extreme caution.

With the risk to the crew, ourselves and potential damage to the boat, the recommendation to have guns on board when transiting this area, and the fact that our insurance coverage would stop the moment we entered the “pirate zone” lead to only one practical solution.

Join us as we watch Feelin' Good complete her circumnavigation!

by Art, 'arrival in Palma'

Just a few minutes ago the transport ship, Wiebke, moored at the commercial dock here in Palma de Mallorca. I've spoken with Andrea and he confirms the schedule to unload Feelin' Good about 15:00 this afternoon. So, the end of this long passage is almost at an end. The only thing left is to get Feelin' Good back in the water with her captain! We are Feelin' Better right now and expect to be Feelin' Good this afternoon!

by Art, 'leaving soon for Palma'

The ship has finished unloading and is preparing to sail to Palma in a few hours. With about 430nm to go at 17-19 kts that would place her arrival on Monday evening. There's a good chance we'll get Feelin' Good unloaded as planned on Tuesday but probably not until later in the day. Daniele, Tea and I will go onboard Tuesday morning to assist Andrea. Stay tuned for the next report on Tuesday hopefully letting you all know that we are safely in our berth here in Palma. We're very close to finishing up this big journey!

by Art, 'unloading cargo in Tunisia'

Shipping a yacht by transport vessel is not as precise as one would hope. After making fairly good progress all the way from Thailand, the transport ship has been stuck at anchor in Tunisia for a week waiting her turn to unload the cargo she picked up in Asia. However, late last night she finally moved to the wharf and will begin unloading her cargo this morning taking about 2 days to complete. Once unloaded she can finally complete the passage to Palma de Mallorca and unload the yachts. We’re hoping everything goes a little better now and, if so, we can expect to unload Feelin’ Good on Tuesday. While definitely not the kind of ‘sailing’ we like to do with Feelin’ Good, she has arrived safely in the Med as planned and will be soon be ready to enjoy the summer sailing season!

by Art, 'still waiting in Tunisia'

The only news is there are other ship waiting unload too but we've been told we could get into the wharf tomorrow (23-May) to begin unloading the cargo. Once that is completed (2+ days) they will head directly to Palma to unload FG. Check back tomorrow (or Friday) to see if it works out this way. It's frustrating to be so close! I know Andrea is ready to get off the transport and enjoy some good food in Palma! In the meantime I'm re-aquatinting myself with the nice restaurants in Palma and talking long walks all over the city. Daniele and Tea are on the north end of Mallorca hanging out until I have news of the arrival date for FG. We will continue to 'stand-by'!

by Art, 'arrival at Rades, Tunisia'

The transport ship has arrived in Tunisia and is at anchor awaiting its turn at the port to unload its cargo. As there are a number of other ships also waiting, it might take a few days before they can get in. While this delay will also mean a delay in their arrival in Palma de Mallorca, there is nothing to be done except wait. Meanwhile plans have been set for the arrival of FG and the time needed to prepare her for the summer sailing season. Daniele, Tea and I will be in Palma soon and look forward to greeting Andrea and Feelin' Good.

by Art, 'leaving Turkey for Tunisia'

The unloading of the large motor yacht went better than I expected and they are leaving Turkey early on the way to Rades, Tunisia. The passage should take about a little over two days and once they arrive they will need at least two more days to unload. The problem is there is only one large wharf to unload at and, if there is another boat there, they will have to wait their turn. So, we still don't have an accurate date of arrival in Palma. Regardless, Andrea will be looking forward to this moment and getting back to being a captain instead of a crew member on the transport! And Daniele, Tea, Tracy and I will look forward to reuniting with him on Feelin' Good. We've all been apart too long!!!

About 07:00 this morning, the transport ship pulled into Izmir, Turkey where they are working to unload the large motor yacht along with her two tenders and fishing boat. The plan is to have all this completed and be ready to leave by the end of Tuesday (14-May). As you might have read below, the loading of the massive motor yacht took way longer than planned so I would expect the unloading to also take some time. Let's see how the forecasted departure date works out. In the meantime, Andrea is anxious to get off the boat for a while as he's been stuck onboard for the past three weeks!

by Art, 'entered the Mediterranean!'

Early this morning, Feelin' Good entered the Mediterranean Sea on the transport ship after exiting from the Suez Canal. Months and months of planning, waiting and frustration finally came together and we are now closer to home! Next stop is Izmir, Turkey to unload a few things, then onto Tunisia for unloading a few more things and finally we will arrive in Palma about 20-May. Congratulations and thanks to Andrea for overseeing this part of our circumnavigation.

For the 2-3 days it took the transport ship to pass through the "High Risk Area" (where the threat of piracy has been for the past 10 years) everyone was restricted from being on deck except if you were scheduled to be on 'Pirate Watch'. Andrea chose to be added to the watch schedule with all the other crew members and they took their turns standing watch during the time it took to pass through this unsafe area. Once through, Andrea gave out some 'pirate' hats we had onboard to the crew and everyone celebrated with a nice party including some beer and a fresh roasted baby pig! Right now they are in the middle of the Red Sea between Djibouti and Suez. The plan is to do the Suez Canal transit on 09-May and then go onto Izmir, Turkey to unload the big motor yacht, Ria.

Well, after a delay in the Maldives, Feelin' Good is off again. There was a 45m motor yacht and its associated tenders that needed to be loaded in Male and it took a number of days of rigging and re-rigging cranes to get her onboard. Anyway, everything is load and secured and they are finally off to the Suez Canal now through the Arabian Sea. The expectation is to be at the Canal in about 7 days, then 3 more days through the Canal and onto their first stop in the Mediterranean in Izmir, Turkey.

Feelin' Good has been loaded and all the other boats loaded as well. They've now departed for the passage to Male in the Maldives to pick up another (big!) motor yacht before continuing on to the Mediterranean.