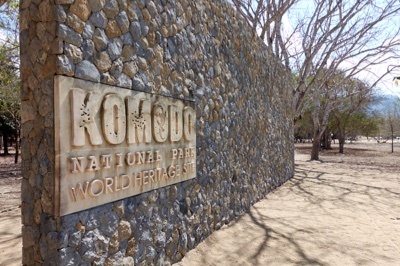 A visit to Komodo National Park is a shark-dive on dry land. The comparison clicks as I walk along behind our guide, his smart camo-boots lifting fine wisps of parched powdery dust with each step. I’m also listening to him chat away about how many tourists each year are bitten by the Komodo dragons. Last year it was four, apparently.

Our small group follow a well worn trail that leads out from the ranger station and the very modern, and very thoughtfully designed welcome center built to make tourists feel comfy. It’s all quite sanitary and benign (plenty of toilet facilities too) and there’s even an education display, presented in multiple languages of course, that teaches a bit of history and mentions something about a legendary Komodo dragon princess. Mixed in with the foo-foo stuff is a smattering of pertinent facts regarding the very large, and very deadly, giant lizards we are all about to come face to face with.

Our arrival happened to coincide with the tail end of the dry season, but this part of Indonesia is starved for foliage at any time of year. What sparse hints of cover there is lies as low scrub with desert-suitable palms and tamarin trees gaining the greatest altitude. Our guide informs us that aside from the dragons, Komodo is home to 125 species of birds, a large population of deer, wild boar, buffalo, and a several varieties of venomous snakes; the most deadly being the spitting cobra. Aside from our guide’s long trousers and thick boots, the rest of us are in shorts and walk in flip-flops.

It’s just after eight in the morning and any hint of shade is already a blessing beneath an equatorial sun that beats down on us without mercy, singeing any exposed skin like a marshmallow held to a flame. We’re tramping toward the watering hole which our guide says is the best place to find the dragons, and surprise, he is correct. The watering hole turns out to be a smallish muddy pit containing little in the way of moisture, but two deer linger nearby as if hopeful that one of the rangers might turn on the spigot and fill the hole from the pipe they’ve installed.

The dragon looks bored. Our guide introduces us, not by name—they don’t go quite that far here. But we’re told that this one’s a male and approximately 25 years old. The creature is close to four meters in length and weighs nearly 200 kilos. He lays stretched out on his belly beneath an appropriately sized patch of shade, eyes closed, tail curled, and with his head resting as if he were a large hound asleep on his doggie-bed. It’s easy to see how visitors can become complacent.

Our guide, pointing and gesturing casually toward the huge lethargic reptile, (as the rest of us stand perhaps three meters away) tells us that these things are ambush predators who are capable of launching from a prone position to top speed in under a second. On hearing this I take a step back—perhaps even three or four, but our guide assures us that this particular dragon is not in the mood to deliver one of his famously lethal bites. 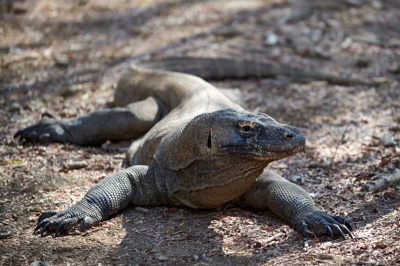 Our guide is still monologuing when the dragon opens his eyes, he’s mid-sentence on breeding technique when we next see the dragon has raised his head from the ground. It’s about this time I notice the long claws that decorate the dragon’s front feet appear to move downward, and ever so subtlety, to grip the earth. Our guide, undeterred, is instead gleeful that our sleeping dragon has awakened. None the less, in another moment I see that he too is backing away slowly, as well as readying the forked wooden stick he carries for our protection, but alas, this is the sum of the action we witness from the big guy.

Our escorted walk and search for more dragons continues. There are around fifty fully grown Komodo dragons that regularly congregate near the ranger station and the welcome center, but the island’s total population is much larger—over a thousand live here happily. Well, for the most part that is, they are known to eat their young from time to time.

When we first arrived and dropped anchor in front of Komodo National Park, we were excited to see a sizable dragon strolling the beach in late afternoon sun, but this remarkable scene was marred by heaps of plastic debris allowed to collect in thick drifts at the high tide mark. Discarded plastic clutters the stretch of beach that runs directly in front of the park’s visitor center, while plastic trash floats abundantly amongst these islands’ many eddies and currents—the stuff’s everywhere you look.

The reefs here are beautiful and officially protected. Fish populations appear healthy, but while snorkeling and diving we found ourselves having to push drifting plastic out of our faces, so yes, Komodo, and to all of Indonesia: as a paying customer I’m calling you out on this—you have a serious plastic problem that needs to be addressed.

Back on the dusty trail we breathe in the intense heat, the air hanging so still we can hear the treads of our sandals with each step. Along the way we manage to cross paths with a few more dragons in various sizes, but also more of their favorite food, which happen to be these cute little native deer that are just sort of, well, hanging around. I take note of the deer, who, like the tourists, seem incredibly passive considering the mortal danger they’re in.

Komodo dragons don’t limit themselves to feasting on the deer, they also enjoy a good chow-down on the island’s buffalo—the bigger the better. But unlike the drama and personal risk, say, a pride of African lions must face when they’re in the mood for a buffalo dinner, a lone Komodo dragon can get the job done with a single bite.

They can accomplish this because Komodo dragon saliva seethes with a toxic cocktail of bacteria that slowly kills over a period of days or even weeks. Once freshly bitten, the victim simply runs away, but this temporary inconvenience is of no concern to the dragon. He possesses a remarkable sense of smell along with lots and lots of time. 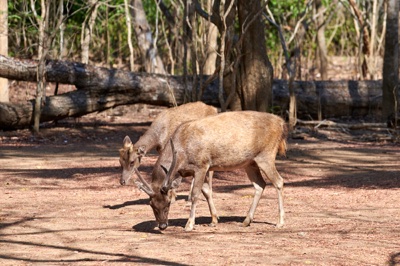 Rather than waste valuable energy laying chase, the dragon instead meanders at a relaxed pace, his slithering forked tongue continuously tasting the air and ground while he executes what is likely the slowest pursuit any predator could possibly hope for and still be guaranteed a 100% success rate. Of all the large predators in the animal kingdom, I believe the Komodo dragon has it the easiest, indeed, it’s good to be king.

With our tour winding down, we loop back toward the ranger station, passing long strings of sweaty tourists on their way in. Our status as return-trippers being apparent, we are repeatedly peppered with a single eager question—did you see any dragons? Yep...sure did.

I pass by these people and more than a few are looking remarkably out of place to me. I can’t help but think they mistakingly signed up for the ‘dragon tour’ expecting to see a Game of Thrones set, or George R. R. Martin in an air conditioned meet and greet. However they got here, these people aren’t the least bit prepared to be marched through a semi-arid equatorial forest in midday heat. Much less on their way to some personal face time with a very large and very dangerous predatory reptile, but hey? Who am I to judge? To each his own, right?

Sure thing, granny, just go right on in there and snap a few selfies with that sleepy dragon over there—he’s just laying around, he won’t mind a bit. You might weigh slightly less than he does, naked, but you’ve got nothing to worry about—your guide is carrying a magic tree branch. And you there, guy with the toddler, you sure know how to show a kid a good time, why not let ‘em go pet the nice lizard...he looks harmless.

Back on board it’s four o’clock and Thomas is out on a SUP along with Elke. I’m watching from the shade of the cockpit awning, a glass of iced white in hand, when two local boats approach—these piloted by a band of very young children. The kids, who look like a gang of tiny pirates, try to sell us some carved wood dragons of dubious origin—I’d rather give them candy and send them on their way, but then we all spot another dragon—a real one.

On the small beach near our anchorage, far from the park and its crowds, a good-sized Komodo dragon lumbers along the water’s edge. The kids all start screaming. Not in fear, far from it. These boys have access to power boats and little if any supervision. Pretty soon the tiny-tot-gang have motored over near the beach, and soon after, the oldest of the group—perhaps eight or nine years old, is out of his boat and striding up on a mission to showoff for the smaller boys.

To demonstrate his superior manhood, this kid grabs a rock and marches right up to the dragon. The dragon, who is large enough to swallow this kid whole, appears unmoved and unconcerned until the boy throws the rock with keen aim and not a moment’s hesitation. As it turns out the kid’s got a good arm, and in the process we also learn that, yes, dragons are fast. After the dragon takes off like a shot into the bush, the kid grabs up a stick, and with cheers of encouragement from his peeps, he chases after it screaming. I found myself feeling sorry for the dragon.